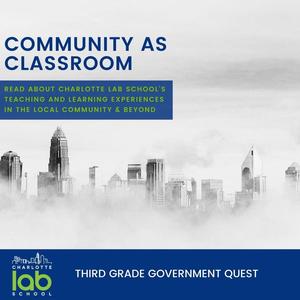 Lab third graders recently explored the branches of government and campaigned to get members of the Charlotte Lab community to register to vote in our May 17 election.


At Lab, we value real-world experiences; to incorporate that into this lesson, Ms. Montgomery and Mrs. Tunick invited all candidates running for Charlotte mayor, Charlotte city council at large, and North Carolina candidates for the US legislature to speak with our third graders. We were lucky enough to have several enthusiastic responses!


Charlotte City Council candidates spoke with third graders about the importance of city government and shared their visions for the future of Charlotte. Third graders are very concerned about their futures, and did not hold back in their questioning. The candidates were asked about climate change, racism, equal rights, the housing crisis, Ukraine, how to help with mental illnesses, education opportunities for adults, gun violence, and much more.


The candidates were impressed with the students. David Merrill and Carrie Olinski offered to return in the fall, if elected, to follow up with students.  Both LaWana Mayfield and Jeff Jackson said it was one of the toughest Q & A’s they ever had!  State Senator Jeff Jackson posted a lengthy Facebook post, praising the third graders for their thoughtful questions.


Though answers differed between candidates and parties, one answer remained the same for everyone: within politics and life, there will be different opinions and you may not always agree; however, it is important to always be kind!